Bad Medicine is a raucous new tabletop party game of quick thinking and hilarious storytelling from Gil Hova, the designer of the word game Prolix and the economic strategy game Battle Merchants.

In Bad Medicine, you and your opponents are huge pharmaceutical companies. Your goal is to create names and advertisements for new drugs to cure the current Malady, while downplaying any side effects that you'll never know about ahead of time.

You'll formulate a drug to cure the Malady. Then you'll pitch it to the other players. Of course, your drug will have a side effect.

If your pitch gets the most votes, then your drug's side effect will be the Malady to cure next round!

"Bad Medicine is the kind of game that can be learned in moments, played in minutes, and enjoyed for hours. In no time, our pitchmen were hilariously trying to sell the drugs that the developers had slapped together. Bad Medicine is a perfect party game - clear, simple rules, minimal fussing with components, and constantly and consistently engaging gameplay - everything you need for a raucously good time." - Gameosity

"If your party is suffering from anxiety, boredom, or constipation, then Formal Ferret 'Pharmaceuticals' brings the cure with Bad Medicine. This party game features clever drug pitches, thousands of possible naming combinations and outlandish side effects to make everyone at the table bust a gut laughing. Bad Medicine is a must-have for any game collection." - Who, What, Why

"An uproarious game of making drugs and pitching them! How you present the drugs, and getting through them with a straight face is half the fun." -Gamers on Games

"It's a party game that allows you to bring your brain and have some good laughs... If you're a gamer and want to add a party game to your collection, this one will fit in." - Punching Cardboard (listen to the full review here)

"This game is great fun and I think it spans almost any type of player, from the picky miniatures gamer... to casual Munchkin gamers, to strategy gamers who are just looking for something light in between the heavy thinking games. Or you know, if you think you're a comedian after a few mai tais." - Game and a Curry (read the full review here)

"As far as party games go, Bad Medicine definitely seems more involved. I mean that in the best way, because the same cards are used for many different purposes, which is really the best thing you can do for a card-based party game to ensure people play it for a long time. I dig the slightly morbid theme of prescribing fake medicine for various afflictions. Solid all around." - Meeple Mechanic (Score of 34, #1 Kickstarter campaign of February 15, 2015!)

"I was fortunate enough to have Gil's table next to ours during Unpub 5 and got a chance to play it couple of times over the course of the weekend. It was not only a blast to play, but also listening to other's play it over the course of the weekend was just as hysterical. If you and your group of friends think they are quick with their wits, have a little BSing power in them, and enjoy a party game with lots of laughter, than be sure to check out Bad Medicine on Kickstarter right now." - Kick the Box from February 16, Troll in the Corner (read the full review here)

"From making up drug names straight through to defending side effects like why having an extra pinkie finger is beneficial, Bad Medicine is 100% Good Fun. It's a must-have party game for both gamers and non-gamers. Highly prescribed!" - Bonnie Neubauer

In order to download this game you must purchase it at or above the minimum price of $4.99 USD. You will get access to the following files: 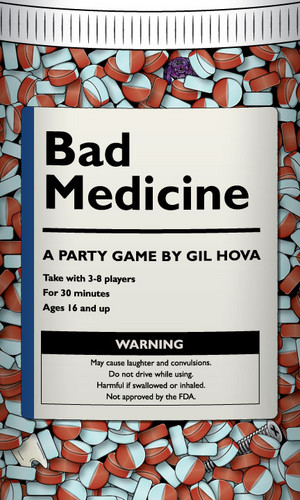